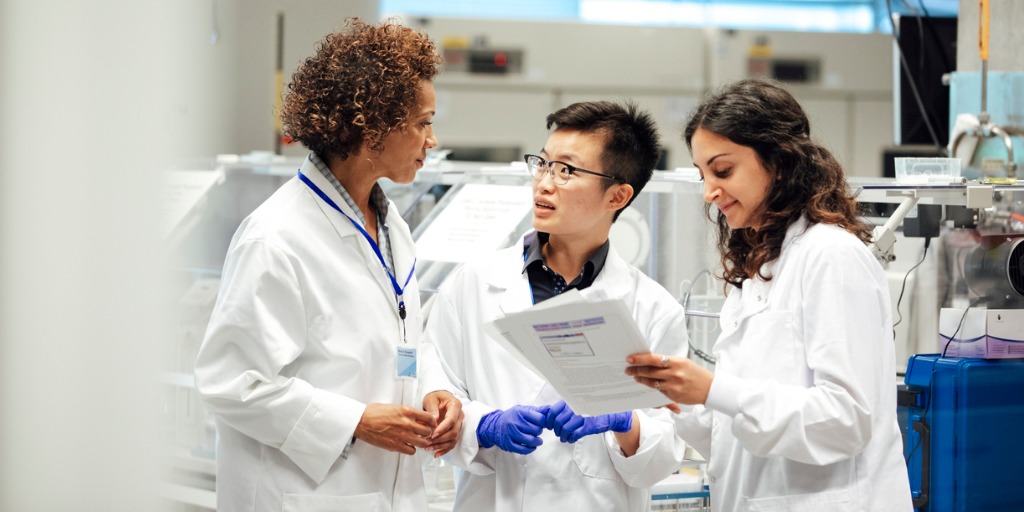 Before a potential new therapy can reach patients, it goes through several clinical trial phases that test an intervention for both safety and effectiveness. Looking at the big picture, it takes approximately ten years for a new treatment to complete the journey from initial discovery to the marketplace. Clinical trials alone take six to seven years on average to complete.

Before a potential treatment reaches the clinical trial stage, scientists research ideas in what is called the discovery phase. This step can take from three to six years. Typically, researchers will test a potential new treatment in animals before moving on to the first stage of clinical testing in humans.

Clinical trials move through phases, testing interventions in larger groups until they are determined safe and effective. The typical clinical trials timeline looks like this:

Phase 1: These trials usually enroll 20 to 100 healthy volunteers or people with the condition being studied, and last several months. This phase measures safety by testing for any adverse side effects of the treatment, but not necessarily how effective the drug or device is.

Phase 2: Around 70% of potential new drugs enter Phase 2, which continues to measure safety, while also looking at how effective the treatment is and carefully investigating its side effects. Phase 2 trials recruit up to several hundred patients with the condition to take part. This phase typically lasts several months to two years.

Phase 3: Just 33% of drugs make it to Phase 3, which tests the potential treatment in the largest number of people. This phase measures both safety and effectiveness with many volunteers, sometimes thousands. Phase 3 trials last from one to four years.

FDA approval: After Phase 3, a pharmaceutical company may submit a New Drug Application (NDA) or a biologics license application (BLA) for the treatment to the Food and Drug Administration (FDA). The FDA then reviews results from all stages of the trial to determine whether it will approve the drug and allow the pharmaceutical company to begin marketing it to the public.

Phase 4: This phase is often called “Post-Approval Research and Monitoring.” After a new treatment is approved by the FDA, the pharmaceutical or device company may want to continue monitoring patients to learn more about the treatment’s longer-term effects, while comparing it against other already-approved options. It may take time for long-term side effects to appear, making this an important phase.

Your time commitment to a clinical trial

When you're considering taking part in a clinical trial, ask the study team about the schedule of the trial. Some trials may last for several years, but only require visits every few months, for example. Other trials may require more frequent visits, or for participants to make entries in an e-diary or paper diary in-between visits. You'll want to weigh the potential benefits of participation against the time it may require of you.

If you choose to join a clinical trial, you're free to leave at any time for any reason, even before the trial is completed. Some trials also end early, if researchers aren't seeing the results they were hoping for.

The clinical trial process is long — and it's set up that way so that by the time drugs reach the public, they have been thoroughly evaluated. But the length of the process is one reason why it's so important for volunteers to take part. Without enough volunteers, up to 80% of clinical trials are delayed. Start looking for a clinical trial near you and help research move forward below.