Crohn's in the Workplace: Guidance for Patients 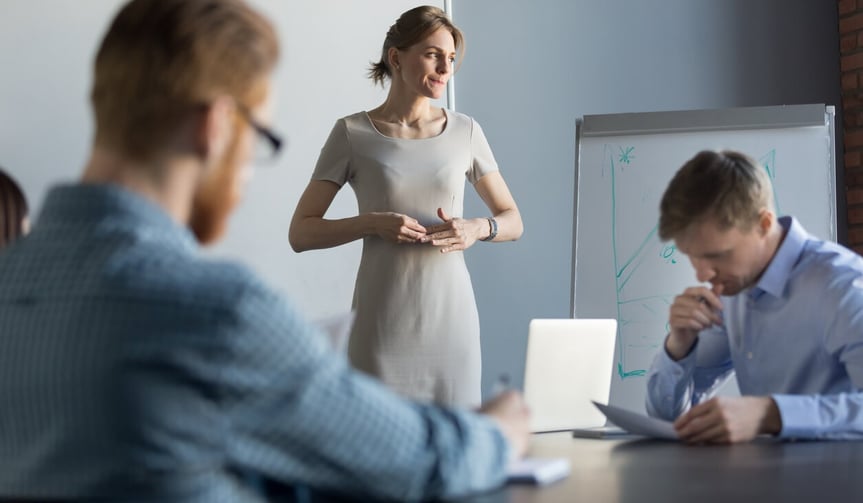 The anxiety hits you as soon as the conference room door closes. How disruptive would it be to get to the bathroom during this meeting? And what if it happens more than once?

Crohn's disease can have a significant impact on quality of life, including at work. In a Health Union survey, 78% of patients surveyed said that Crohn's disease at least sometimes impacts their ability to work. Even when symptoms are in remission, it can still feel like Crohn's controls your day.

Dealing with symptoms in the workplace can add on stress, but there are steps you can take to make it easier to cope, starting with having an open conversation with your employer.

Talk with your boss and coworkers

While it might sound intimidating, people living with Crohn's recommend being open with your manager and coworkers about Crohn's disease, when appropriate.

Under the Americans with Disabilities Act (ADA), people with Crohn's disease have certain protections in the workplace. Companies employing 15 or more workers must follow the guidelines of the ADA, which offers protection from discrimination, and empowers employees to request "reasonable accommodations."

"We've heard from patients who request desk proximity to the bathroom," says Katalina Park, Senior Manager, User Experience Design at Oshi Health, a symptom tracking and support app designed for people with Crohn's and ulcerative colitis. "They'll speak to their supervisors and generally the accommodation is appropriate, and they'll be placed in a location closer to the bathroom so they don't have to worry about rushing to get to the bathroom or distracting others."

Talking to coworkers about your symptoms when you feel comfortable can also provide peace of mind. Some people with Crohn's disease find that eating with coworkers can be a particularly fraught interaction, Park says.

"Meals are very social, and generally it's really difficult for people with Crohn's to be a part of a social situation when there are a lot of things that they need to be careful about eating," Park says.

At the same time, don't share more information than you're comfortable with. If you don't have a close relationship with coworkers, or if you don't work with them directly, they may not need to know about your diagnosis if you don't want to share it.

"In the earlier years, I talked to my bosses but I kept everything to myself with coworkers. Now its a need to know basis," says Vern Laine, blogger at Crohn's: Keeping the Seat Down. "I don't feel it's anyone else's business unless it affects them directly. My current coworkers know, but only the basics of the disease, they don't need details." 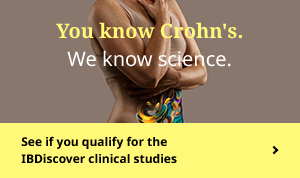 Clinical trials are looking for people diagnosed with Crohn's disease to take part. Answer a few questions to find trials that may be a match for you.

Find a schedule that works for you

Laine dealt with several years of challenges at work before finding his current job, where he's been for 15 years.

"Crohn's made a huge impact on my professional life," says Laine. "I am lucky I have a job I have been at for 15 years now, but I have been through dozens of other jobs. Because of Crohn's I could not keep a job. I was either laid off, fired, or I had to quit."

At his current job, he's been able to work out accommodations with his employer that help him manage his symptoms. He works Monday through Friday and negotiated Wednesdays off to recuperate physically and mentally.

For those who are currently working full time, he acknowledges that while Crohn's disease is different for everyone, he's found personally that taking small breaks throughout the day has helped him reduce fatigue and stress.

"Take breaks and lunch – don't work through them," says Laine. "Take your own food and drink and eat little and often throughout the day."

Flexible scheduling has also become more common in the modern workplace. In a survey conducted by Zenefits, 67% of small businesses offer some form of flexible work schedules. Consider asking your employer if you can work from home for part of the week, if being at home would help you better manage symptoms and stress.

Stress doesn't cause Crohn's disease, but it can make symptoms worse. At work, it can be impossible to completely avoid stress, but finding ways to relax at home can make a difference.

"Managing stress is easier said than done, but for me stress and anxiety are major players in triggering my symptoms," says Matt Strutt, founder of the blog and nonprofit Give Crohn's a Slap from Me. "I see the brain and the gut sometimes as arguing siblings. Finding time for things that relax you or minimize your stress levels is key. Whether it be going to the gym or taking up painting, do things that take your mind off the day to day stresses."

Most people with Crohn's disease also find that certain foods trigger their symptoms more than others. Keeping a food diary can help you identify triggers and find a diet and eating schedule that works best for you. For some people with Crohn's, eating small meals throughout the day works better than having three full meals. You can also consider keeping small, safe snacks at your desk, like pretzels or crackers – assuming refined grains aren't a trigger for you.

"It's a case of not one size fitting all. As everyone dealing with IBD will tell you, some foods are symptom triggers and others aren't," says Strutt.

Know that Crohn's doesn't define you

Even after talking with your manager about accommodations, identifying your food triggers, and managing your stress, Crohn's disease might still feel like the elephant in the conference room.

"When I worked full-time as a news anchor and reporter and then as a PR professional, my Crohn's was always a part of my day," says Natalie Hayden, freelance writer and blogger at Lights, Camera, Crohn's. "Even when you aren't symptomatic or ‘flaring,' Crohn's is always top of mind, no matter what I do."

Hayden says she considered most decisions through the lens of how it might impact her symptoms. A morning cup of coffee could trigger cramps later in the day. Dress pants would be too restrictive if she felt bloated later – so she wore dresses to work most of the time.

At the same time, while she had to revolve some decisions at least partly around her Crohn's disease, the condition didn't define her then, and doesn't in her role now, as a stay-at-home mom and freelance writer.

"When I was diagnosed with Crohn's two months after college graduation at age 21, I didn't allow the disease to stop me from achieving my dream of working in television," says Hayden. "I landed a job two months after being diagnosed and moved eight hours away from family and friends while on 22 pills a day and navigating the ‘new' me. It is possible."

Connecting with others living with Crohn's online or in person can help. Following blogs and social media accounts related to Crohn's can also help those living with the disease feel less alone.

"Be patient with yourself," Hayden advises. "Understand there will be setbacks and detours along the way, but always remind yourself of all you are capable despite your illness."

We’d love to hear from you